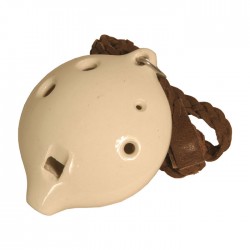 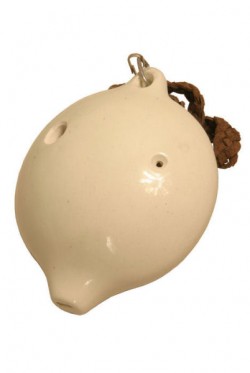 Ocarina, Necklace, G, 4 x 3.5 inches. Glazed clay, six finger holes, over an octave of tones, leather necklace included. 4" length, 3.5" width, and 2" depth. Clay molded, variations is the final product should be expected.Although the term Ocarina, is less than 200 years old, the first known ocarina-like instrument appeared in South and Central America about 12000 years ago. Ocarinas shaped like birds and animals could also be found in India as early as 5000 BC. China had its own rounded and egg-like forms called a Xun. In 1527, Cortes sent a group of Aztec performers to Spain, where they introduced the Ocarina to Europe. They remained a popular toy for more than 340 years until 17 year old musician-baker Guiseppe Donati originated the first pitched diatonic scale ocarinas.To play the ocarina, hold it at a 45-degree downward slope from your lips. The thumbs cover the bottom holes and the Index and Middle fingers of each hand cover the top holes. Angling the ocarina up so that your upper lip impinges on the labium window will create sharps, or flatten the tones. Made in Pakistan