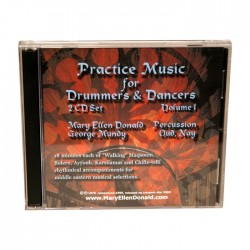 This 2-disc set includes Mary Ellen Donald on Percussion and George Mundy on Oud and Nay. Includes 18 minutes each of Walking Maqsoum, Bolero, Ayyoub, Karsilamas and Chifte-telli. Volume I covers rhythmical accompaniments for middle eastern musical selections. (1976; re-mastered 1999; discs released 2005)Mary Ellen Donald has been involved in Middle Eastern music as a dance student and a musician since the late 1960's. She is known by many as the "Guru of finger cymbal playing." Mary Ellen studied dance with Jamila Salimpour, drum and tambourine with Vince Delgado, Tony Lammam, and various Arab drummers. She has written, produced and published several books and tapes on Middle Eastern music. Since the 1970's she has performed in numerous concerts, on albums including Magda Helmy, Gallal Kutub, Yusel Mostafa, and Light Rain, and on the soundtrack ABC-TV series, the Young Indiana Jones. Mary Ellen continues to be in high demand as a musician, teacher, and organizer of events. Her youthful vitality and highly developed sensitivity to music may be partially attributed to her being legally blind.Excerpt from The Caravan, Vol. 13, #6, May/June 1997 Made in USA