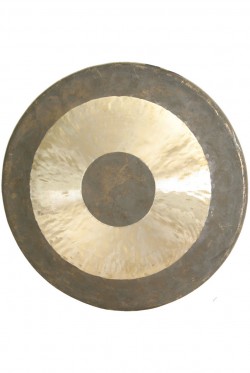 Chao Gong, 14", with beater; rich, full sound. It has a very earthy, grounding character with well resolved tones, both low and high. The bull's-eye pattern of the chao gong is the result of grinding away the fire-darkened surface to reveal the bright brass color.

The Chao Gong is a very elegant and distinctive gong that produces a full and sustained wash of musical overtones. Its beauty and its traditional appearance make it a centerpiece in any space, indoors or outdoors. This style of gong dates from the Han Dynasty where it was used for spiritual drumming, large meetings, and to announce the procession of important people. In more modern times, the chao gong has found a place in different genres of music, most notably symphony orchestras.

The Chao Gong, otherwise known as a tam-tam, is one of the most familiar looking Chinese gongs. The chao gong differs in shape from the wind gong in that it has a rim around the outside edge. It also has a very distinctive "target" appearance. It is made of a bronze alloy which is roughly 80% copper and 20% tin, and the crafting process is a mixture of hand hammering and working the bronze on a lathe while carefully heating and cooling the metal.

On the chao gong, the center spot and outside rim retain the black copper oxide that forms when the gong is made. On the rest of the gong this coating is removed and the surface is polished. Chao gongs are available in a range of sizes, with each size having its own distinct full sound. Smaller sizes have a rich but higher sound while the larger sizes are deeper and ring with more power and sustain.