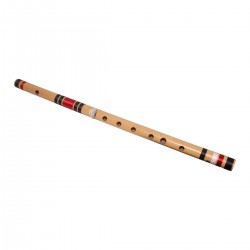 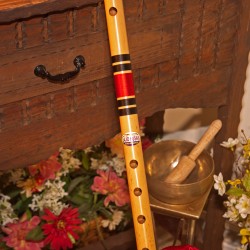 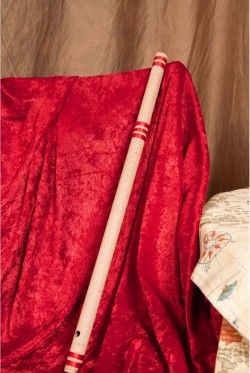 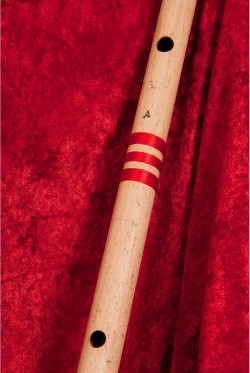 Professional Bansuri flute in A, approximately 22.75 inches in length. The Professional Bansuri has a mouthpiece that is played in a similar way as the western transverse flute. It is made from a single piece of bamboo with seven holes. The pitch indicated for the bansuri means the flute will play that pitch with the first 3 holes covered. The dominate hand plays the lower three holes. The seventh hole is optional and rarely played. Its main purpose is to give greater accuracy in the upper octaves. It may be played on the rare occasion when you need to play the Ni in the lower octave.

The bansuri is a transverse flute from India, literally from the words bans (bamboo) and suri. It is one of the oldest musical instruments. All half notes, accidentals and microtones are produced by a unique fingering system. The finger holes have to be precisely covered either fully or half by the phalanxes of the fingers and not by the fingertips. This technique also simplifies the playing of longer bansuris. The standard quality of the Indian bansuris produce a quite beautiful sound, but their tuning is often not exactly to the western standard notes. It can happen that they sometimes sound slightly out of tune to the western ear.

This Bansuri flute is hand crafted. Becoming a perfect flute maker takes a long time. One must know the materials as well as the craft; and one must have patience. Each flute requires years of preparation and then concentrated attention to details. The Bansuri flutes are made from only one type of bamboo, called cinchor. This bamboo only grows in the interior forests of Assam. Only Bamboo of 3 to 4 years old and of the proper diameter can be used. The cut bamboo is then treated, dried and stored for years until it is properly seasoned. The longer it is seasoned the better the flute. The correct notes are achieved by piercing the seasoned bamboo with hot iron rods in precise positions along the length.